I was invited to the launch of the new Jaguar I-Pace at Taggarts Jaguar.

It was in May and I’m sorry it’s taken so long to get this post together!

This isn’t a sponsored post but I do have a relationship with Lookers Group when I borrow cars to review. Just to be fully transparent!

Some of the Jaguar HQ brand team were there and Jason, Head of Business for Taggarts Jaguar, was there too, and was kind enough to take time out to chat to me about the car.

The I-Pace is an electric SUV. Many of you thought the last review I did on the E-Pace was the electric model because of the ‘E’ but this is the electric version. It first featured at the LA Motorshow in 2016.

The I-Pace is showing the way for Jaguar’s new brand strategy. I imagine in the not too distant future, most of the models will be electric.

The showroom model was once again that fabulous bright blue colour, Caesium Blue. I also love the two-tone wheels

The basic model starts from £63,495. Not a cheap car! However, when you think of the quality of the car, the finish, the tech that’s crammed in, you do get a lot. I also think of the savings on road tax and fuel… Still, it’s a car I’d like to add to my Wishlist, if finance options were a bit more friendly. Being a brand new car, they won’t be ready to give it away on ‘hot deals’, especially as Jason says pre-sales were so good. Here’s a guide from Taggarts, including information on the government grant available to eligible customers. 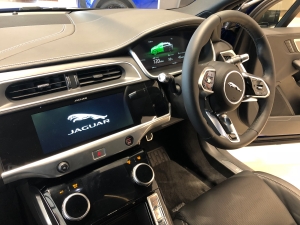 When I sat in the car, you could immediately tell it was a Jaguar. The quality of the design and finish was spot on. The thinking behind the driver’s cockpit and the styling of the panoramic sunroof (which once again doesn’t open!), to the sports seats, which were super comfy and felt very luxurious. And something I’m a bit OCD about, a very nice driving position.

In the back, there wasn’t a whole lot of room, similar to the E-Pace. You can see by the picture I took that there isn’t a lot of room for tall people. Once again though, the seats were super comfy and the panoramic sunroof would ensure a scenic drive if you were in the back.

The car was higher up and there’s a function to higher or lower the suspension which would be handy. The boot was huge! I was super impressed by the boot. It has 656 litres of boot space, which expands to 1,453 litres with the rear seats folded down. The boot although the dimensions aren’t the same, is a bit bigger than my car, but my car opens up much bigger when the seats are folded down and it’s also taller. You can find the spec of the basic model here and the top model, the First Edition here (from £81,495).

Of course, people immediately compare the I-Pace to the Tesla, as it’s the most well-known EV brand.

It has a range of just under 300 miles, running on a 90kWh battery. That doesn’t stop it from being powerful! 0-62mph in 4.8 seconds! It’s built on what has been described as a ‘skateboard’ platform, which is specifically for fully electric cars. It’s a 4WD and boasts 396bhp.

I think Jaguar has got off to a flying start with its first EV. I wasn’t able to test drive the car as there was only one in the UK travelling that day. Maybe soon…

Next, I’m hoping to organise the new Volvo XC40, which looks stunning! Keep an eye out.

N.B The featured image of the car being charged is the property of Jaguar.

This site uses Akismet to reduce spam. Learn how your comment data is processed.

Popular posts on my blog

My content is all original and where I have been given items free of charge, I will make sure this is clearly labelled.

I am an ethical business person and so my content will reflect this.

If you’d like to be featured or collaborate on any work, please get in touch.